From OpenMPT Wiki
Jump to navigation Jump to search

Zxx Macros are MIDI messages that can be sent to plugins or used to control internal parameters, such as the built-in resonant filter for samples or plugin parameter automation (“turning a knob” of a plugin). Macros are executed in patterns using the Zxx (MIDI Macro) or \xx (Smooth MIDI Macro) commands, hence the name. Macros can be used in the XM, IT and MPTM formats and are set up from the Macro Configuration dialog. For plugin parameter automation, the MPTM format also offers special Parameter Control Events with higher granularity than MIDI macros. Depending on the parameter of the Z command, a different macro is processed. Every macro can comprise one or more MIDI messages.

Every macro may contain one or more MIDI messages. Multiple messages can be joined simply by writing them one after another (e.g. Bc0Az Bc0Bz to execute MIDI CC 10 and 11 using the same macro). There is no need to separate the messages with a space character (but it improves readability), however it is important to properly finish MIDI messages: Bc0A0 (set MIDI CC 10 to value 0) works if it is the only MIDI message in a macro (as it is automatically finalised by the program), but if another MIDI message follows, you would have to add another 0 at the end, as the example message contains only 5 nibbles.

Example of switching macros on a channel

In the example on the right, the third macro is recalled on the first row, and some Zxx and \xx commands on the subsequent rows execute this parametered macro. Row 6 switches back to the first macro, which is then applied on row 7.

There are 128 fixed macros which can be called by the commands Z80 through ZFF (and \80 through \FF respectively). By default, The macros Z80 through Z8F control the resonant filter′s resonance amount and Z90 through ZFF do nothing. In theory, all of the 128 fixed macros can do something completely different, while all 128 instances (Z00 through Z7F) of the same parametered macros do the same thing, just with a different parameter. For example, you could configure the fixed macros Z80 through Z8F to control the resonance of the resonant filter, Z90 to activate the lowpass filter (F0F00200), Z91 to activate the highpass filter (F0F00210), Z92 to set the Dry/Wet ratio of the current plugin to 100% Dry (F0F00300), Z93 to set it to 100% Wet (F0F0037F), and so on. You can even configure a single macro to change a number of parameters at once. For example, you could set a plugin’s first parameter to 0 and its Dry/Wet ratio to 50% (F0F08000 F0F00340).

Some of the MIDI messages that can be generated through a macro are handled internally by OpenMPT, others are directly sent to plugins. Here is an overview of all macro types. 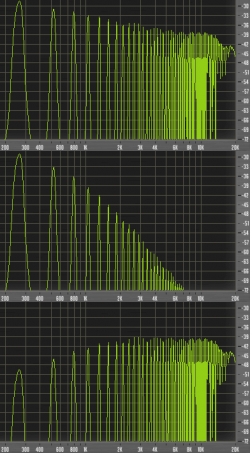 OpenMPT′s resonant filter can be controlled through internal macros. They can be used for setting the cutoff frequency, resonance amount and filter type. The resonant filter is only applied to samples — it does not affect the output of plugins. If you want to filter the output of a plugin, you will have to route its output to a filter or equalizer plugin.

The filter type settings (lowpass / highpass) are mutually exclusive, i.e. you can only either cut off high frequencies or low frequencies.

The default parametered macro controls cutoff frequency and the default fixed macros control the resonance amount. Note that all these filter settings can also be set up for each instrument.

By default, no sample needs to be playing to apply filter macros; they will be applied to whatever sample is playing next, unless the instrument settings would override the macro′s functionality. However, if Local Filters are enabled, the filter is disabled on every new note. The filter can also be disabled manually for the next note by setting the cutoff to 7Fh and the resonance to 00h.

This is another internal macro that is handled by OpenMPT. It adjusts a plugin′s Dry/Wet ratio (which can otherwise be set from the plugin setup on the General Tab) of the currently active plugin on the channel the macro is executed. The MIDI message for this macro type is F0 F0 03 xx, where xx is a hexadecimal number between 00h (0% Wet / 100% Dry) and 7Fh (100% Wet / 0% Dry).

Only the first plugin in a plugin chain is affected by this macro, and channel plugins are generally preferred over instrument plugins.

In the MPTM format, this macro type is superseded by Parameter Control Events, which provide finer control of more parameters (the first 1,000 parameters of any plugin can be controlled).

Only the first plugin in a plugin chain is affected by this macro, and channel plugins are generally preferred over instrument plugins.

Any macro that is not covered by the above macro types is an external message, i.e. it is not handled or interpreted by OpenMPT itself but is rather sent to plugins. External messages include MIDI CCs, Channel and Polyphonic Aftertouch, note events and generally any kind of MIDI event.

The MIDI message is only sent to the first plugin in a plugin chain, and channel plugins are generally preferred over instrument plugins.

To do: More content from the OHM
Find more unfinished articles
Retrieved from "https://wiki.openmpt.org/index.php?title=Manual:_Zxx_Macros&oldid=3955"
Categories: